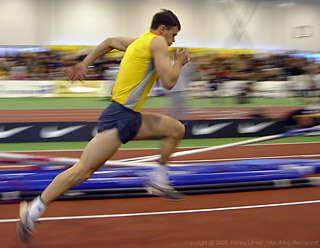 (It's Estonian decathlonist Madis Kallas in Jumping Gala 2005 in Tallinn)

So, decathletes are in competition today + tomorrow, in Goetzis, Austria.

So, who's about to win? :) I personally hope Estonian risign stars Mikk Pahapill + Madis kallas (-PDF!-) will be able to beat their personal recors :)

First event is already accomplished, the winner is Bryan Clay from the United States :)

More information about Decathlon from this great site - Decathlon2000
Posted by bright at 13:19