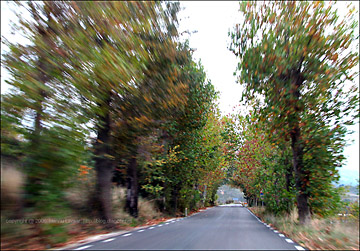 Have you ever wondered when we all write blogs, then who has time to read it? :P
Let's start a NBEFTY campaign! (no blog entries for ten years) :P
The pic is taken in Spain again, near Trevelez. As the terrain is high some 1500m above the sea, expect a lot of cooler weather there.
What will we name this picture this time? I know! A life tunnel! I'm f***ing twenty-six bloody years old, and I feel I was born yesterday. That fast.
See you in ten years! Except when I ran out of supporters or sponsors for my new baby NBEFTY bloody campaign :P
Posted by bright at 00:32 3 comments 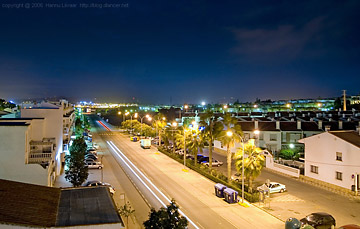 (Picture is taken in Caleta de Velez in Spain, at nighttime, November 2006.)

Spain is my favourite destination today, but let's hope martians do not destroy our planet this or next year, so there would be a theoretical chance to see other beautiful countries, too :P

Wikipedia is my favourite resource in the holy internet today, so I'm dreaming about times when I wikipedia and blogger will join forces, so I can select the word here in my blog and choose a "set this word as a link from Wikipedia" from the right-click menu :P Google, Orkut, G-mail and Blogger is acutally admirable association already, I admire the smart way they have made everything easy to simple human like everyone of us, while they always comprehend the future of globalization. So when there will be in a news that Google has bought Wikipedia, that will be the best news of a day, for me. Do they also already have e-bay? Fortunately buying something from ebay is not as easy as to make the selected text link, so I hope shopping and money will not be visible in our blogs too soon :P .. but today I will not link a single word, as I think I'll run out of time.

Opera is my favourite browser today. Easy and mail integrated to it, free, and very user friendly. Notes are saved realtime, every kind of searches are integrated, it is fast and reliable, and its logic fits my needs better than IE for example. I've tried firefox before, didn't find it a lot better than IE. Okay....

.. Were the Christmas peaceful and was the New Year's Eve fun? :) It was, for me, though I think I'm too old for fireworks and other that kind of neat stuff. We were visiting friends with our family, playing some monopol and drinking some beet.. pretty nice and peaceful.

Were you happy with 2006? I was. Not a huge success of year in term of business, however I have a daughter now and everyone is happy - that's the main thing.

I lately discovere my sister has a neat blog somewhere in the endless space there, I knew she has had it for a while, but it's me whos far too lazy to check it. Anyway I've found it interesting and it is in my bookmarks folder now. Have you also been thinking when we all have blogs, who's going to read them? In one way or another, blog is a trend, and even our minister of economics thinks so. It seems the blog has just become something we can't compete without? The super fast and easy way to declare what you have.

High-speed connection is also a standard. I'm more or less an internet geek, and Estonia has made a huge success in terms of high-speed connection and wifi. I've moved on wifi by myself (I hate these wires), also replaced traditional computer with a laptop one (finally the cables are all gone except the power cable).

There are also actually another cable remained, my 7 years old CRT monitor cable. There's room for LCD displays to produce as vivid picture as the last trinitron-based CRT-s do, and as I do not have money to buy EIZO, I have to wait for some time :P applce cinemas and LaCies are also OK, but CRT is better (also for my eyes). As with the wire/cable saga, I do not think it's over yet, now we have USB cables instead of power and network ones :P

I've recently discovered my old VW takes a lot of fuel travelling around in the city. When there are still rude oil remained in 2010, I'm hoping to upgrade to TDI engine/car :P I can drive 500km today with my non-turbo 1.8 gar engine today, while I could drive 1000km with the TDI engine :P, while the cost of the fues is the same. The OPEC official site also declares that the organization thinks the oil prices will be stable this year in 2007. Let's see.

If you have a chance, also check out the Dec 2006 National Geographic magazine, very interesting reading as always, special article about Dubai this time. Atlantis of this millennium?

I've also read from the news that the ex dictator of Iraq is executed lately, what do you think will it bring more peace to the world? What will happen with Cuba when it finally gets access to democracy? :) Will europeans make goods one day again? (they're making money these days more or less, as manufacturing has moved to China more or less). So living well these days seems to mean you are able to produce shit out of your mouth with asking as much for it as possible. If you want to get rich, I'd recommend you to publich a book talking about "how to get rich?" :) or convey a conference "how to sell your products better" with the ten thousand seat auditory the ticked priced $200 per face :P

Looking forward to the Peking 2008 olympic games also, I'd like to see how grand will the games be?

Will the world press officially introduce aliens to human this year? We are curious since Roswell, aren't we :)

We are living in an interesting times :)