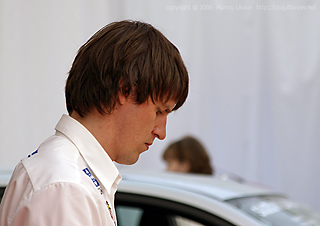 This is Estonian rally star Urmo Aava. He was in the "Motorex 2006" show today kindly sharing autographed postcards. Mr Aava still drives a JWRC car Suzuki. I hope we see him in real WRC one fine day, but we should also be ready for the worst scenario, as there are big money in WRC/F1 game, so they are like some competitiors (rumours say F1 wants to kick WRC).

If you haven't seen how the heart of the Suzuki looks, here it is:

Markko Martin was even more famous lately but he decided to step back from WRC arena last year. Mr Martin does not like to talk too much, so we don't know the exact reasons. I believe he is remembered as a Ford Focus driver who won outstanding bronze medal in WRC back to 2004. He has also won many rallies. Respect, Markko.

Okay what else did I see in Motorex. First, I believe I last visited this exhibition back in 1995. Today is more like a show, a lot of cute girls hanging around, a lot of performances and games, and if you do not play music so loud that your ears hurt, you don't rule. In comparison the exhibition was a lot larger also. Sitting in a new car is a good feeling, and car manufacturers know that, too :P We all want new, stylish, economic, safe cars with extras, don't we :P 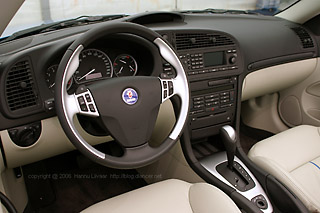 Okay, I'll go on with it some other day. It was a great experience over eleven years :)
Posted by bright at 00:25